FAST GROWTH IN BUSINESSES CAN BRING EVEN FASTER PROBLEMS IS GOVERNMENT THE SAME?

FAST GROWTH CAN BRING EVEN FASTER PROBLEMS! In the last 40 or so years I’ve seen thousands of businesses, many of them with financing problems.  I have made my living by helping businesses with problems find financing. One common problem is high growth.  Businesses that grow too fast often run out of working capital to […]

DO POLITICAL CENTRISTS REALLY JUST GO WITH THE FLOW?

Many of us like to be viewed as political centrists because we don’t relate to what we see as the extreme views on either side of the spectrum; the dreaded right or left wingers!   I know I viewed myself as a centrist years ago probably mostly to avoid confrontation with either side.  Maybe I was […]

BUYNG VOTES I just heard a news clip on Fox about a politician who was sent to jail for  buying votes in Kentucky.  Seems this guy paid $50 or so for people to vote for him and he got caught.  I would guess must would see the wrong in this action and would agree that […] 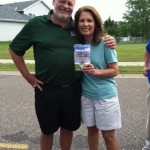 A  friend asked  me if I would be willing to drive Michelle Bachmann in a parade in my Volvo convertible.  I am somewhat of a political junkie so I did it!   It was a real kick to meet her , her mom, and Marcus who were together in the car with my wife and […]

I confess i used to be very apathetic about politics and world affairs.  Even in the Viet Nam years I barely knew what was going on and it followed me for many years as i was focusing on my career and family. Now that i have more time along with cable news and the internet […]

This is a piece a friend of mine wrote. He actually reaearches while I just bloviate!! Please Know and Understand This: The Liberal’s Numbers Don’t Work! First, recognize that the proposed Republican plan for fiscal reform is just that – a proposal, a place to begin negotiations. It does do many things, and raising tax […]

WHY CAN’T OUR GOVERNMENT MAKE DECISIONS? DO THEY MIX TOO MANY ISSUES?

I think by now everyone knows the US is in a financial bind. Too much debt, too much spending that increases debt, and many other problems. Why don’t they do something we keep asking? One of the best classes I took while at Norwest 30 years ago was a class in problem solving and decision […]

IS IT TIME TO DO A GOVERMENT BAILOUT?

I’ve been thinking again. When businesses get into trouble then need to quickly get new financing in order to execute their turnaround plan and stay alive. They approach lenders who may buy their plan and provide the money they can get, or they seek to bring new equity into their business. In the process of […]

IS BEING A VICTIM ADDICTING?

Now, this is may be an unpopular idea but I am going to test the theory by posting my thoughts here.  My purpose is to get people thinking, not create a debate, or offend anyone. The driver for my thoughts comes from watching the Occupy Wall Street protests.  I will not claim that they are […]

BUSINESS TURNAROUNDS, ARE THEY DIFFERENT FROM THE USA TURNAROUND?

I’ve been thinking again!  I don’t claim to have all the answers, but as a country boy do have a bunch of observations and questions! I’ve been around businesses in distress for over 30 years, having financed them, coached them and procured financing for their turnaround  plan.  Some make it; some don’t.  I liked working […]