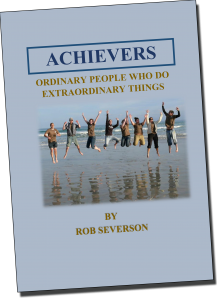 What do some of the most successful people in America have in common? They work hard to make a living, set and achieve goals and are passionate about helping others.

Everyone, of course, recognizes these qualities in high profile people like Bill Gates, Warren Buffet and Steve Jobs. Plenty has been written about them, but according to Rob Severson, a 1969 graduate of Luther College and author of Achievers: Ordinary People Who Do Extraordinary Things, today’s kids don’t relate so much to high level achievers.

“What I discovered when going into schools and speaking on the topic of achievement is that the kids really like hearing about the success stories of ordinary people, someone they could reach out and touch,” he said. Severson is a former bank president who readily admits he began his career as a classic underachiever. “It was thanks to the mentors who saw promise in me that I was able to achieve success in my own career.”

In his latest book, Achievers, readers meet people like Kevin Wilt, who was raised in a farm family rich in values but not so rich in money. He went on to lead the cereal division at General Mills before he retired. Also featured, Steve Chepokas, who as a young man was distracted by several illnesses that could have killed him, but he got back up each time and went on to start up a very successful charity: Miracles of Mitch Foundation.

Korey Dean Senior’s story is also notable. He started life in poverty, but went on to make something of himself. He was nominated for a Grammy for his hip-hop/rap recording, in 2005. Also featured are Candy Swanson, a martial arts instructor and self-defense teacher, who despite the hardships she faced in life was willing to do whatever it took to provide for her family; and Rebecca Noecker, who was born into a privileged family and attended Harvard, then made the decision to dedicate her life to helping the less fortunate.

“I am deeply grateful for all the people who shared their stories and took their precious time so they could help other people ‘figure it out!’ My goal is to use these stories when I talk with students, and encourage anyone who buys the book to do the same when the opportunities arise. I also hope to get it into the hands of teachers for classes on careers and life planning,” said Severson.

Achievers: Ordinary People Who Do Extraordinary Things can be found on the website, www.RobSeverson.com.  For more information or to arrange an interview or speaking event with Rob Severson, contact Rachel M. Anderson, Publicist, RMA Publicity at 952-240-2513 or rachel@rmapublicity.com. Review copies are available upon request.

Copies of the books are $11.95 each, or $20.00 for both books, plus $4.00 shipping and handling. All transactions are handled through PayPal. Autographed copies can be requested.

To finalize your purchase use the View Cart button below.

For questions regarding your order, or if you want to purchase large quantities please contact us.