Last week I made a quick trip to Africa! A friend of mine associated with the Commercial Finance Association in New York had told me over lunch in Florida about a volunteer opportunity to teach African bankers about asset based lending and factoring. I asked him if I could volunteer and he said sure, you are very qualified. The next thing I knew I was talking with CFA staff and then quickly making arrangements to go to Malawi, Africa! With very little consideration I just jumped in, typical of someone who doesn’t do a lot of planning anyway.

Two of us went there to do this training. The other one was a woman from New Jersey who is in the factoring business. We had not met previously so this was another unknown to me. But it worked out well, we worked well together and enjoyed each other. A World Bank man who oversaw the project also attended the sessions to monitor the results. He was pleased.

This was a World Bank project designed to stimulate the African economy by teaching bankers about financing tools used to fund emerging and growing businesses. That got my attention as I have tons of experience in this financing and am aware of the power of the techniques to finance otherwise non-bankable businesses. Used properly these tools can successfully help businesses grow and add to jobs and the economy.

I was intrigued about going to Africa as I had never been there before. The flight was long and used up about 30 hours of my life each way! But it was a valuable experience for me

One thing I learned right away was that the people of Malawi are very nice and welcoming people. Lots of smiles and friendly talk with everyone I met. Most of them even understood an Ole and Lena type joke I told them in class even without being aware of Ole and Lena!

They were attentive during the lectures and very willing to participate in the breakout small groups. Some had very little prospects in their market for this financing while others had several in theirs. I enjoyed all the bankers that I talked with!

I think they got a lot out of it, so our mission was accomplished! I hope this helps them in financing their growth businesses in a secure fashion for the banks.

Many people go to Africa and bring back pictures from their safari vacations. We only left out hotel twice, once to see a market and once to buy souvenirs from local artisans. Here are the pictures of my African trip: 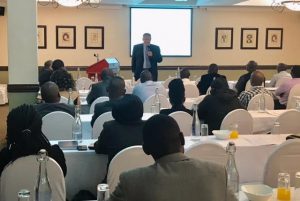 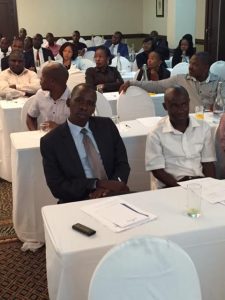 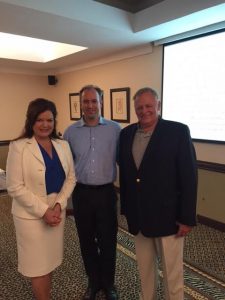 3 responses to “QUICK TRIP TO AFRICA!”