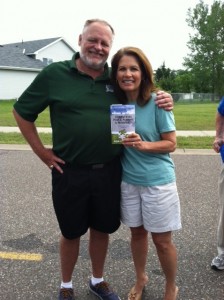 A  friend asked  me if I would be willing to drive Michelle Bachmann in a parade in my Volvo convertible.  I am somewhat of a political junkie so I did it!

It was a real kick to meet her , her mom, and Marcus who were together in the car with my wife and me.   They were very gracious to us.   I think she is an honest politician, that may be a problem for her!

I have shown several people the pictures of the parade and have gotten the mixed reaction that I anticipated.    Some applauded it, some didn’t say anything and a few expressed hate for her.

Now I am not going to discuss her politics here or any one else’s for that matter.  It is obvious that there are tons of different opinions going on today about all the issues being brought forward.  Many drive emotions of  either support or objections, but do they  also need to drive hatred?

The irony of hatred is that most people say they want civility in our government so why don’t they wan civility everywhere?  I know from experience that hatred does more to harm the hater than the hated as it builds up frustration and leads to a lack of serenity in one’s life.   I think most of us have  major control issues and if we don’t get our  way we act out in various ways, hate, medicating with alcohol or drugs, or even  more violent methods.

I disagree with  lots of politicians but don’t hate them.  I can tolerate them with the definition of tolerate being: accept but not necessarily agree.  Don’t we all want tolerance for everyone?

Oh, I hope she likes my book!