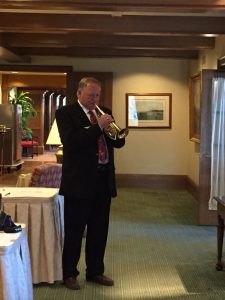 DEEPHAVEN — When “Taps” is played at the funerals of veterans, it’s a little-known fact that the call isn’t often performed live; instead a recorded version is slid into the bugle, Deephaven resident Rob Severson said.

Ten years ago, he decided veterans deserved more than a recording. Since then, he has played the call, “Taps,” 50 times.

“These men deserved a live trumpeter,” he said. “They worked for us enough. We can do something for them.”

From May 28 through Labor Day, “Taps” will be played at dusk in Gettysburg, Pennsylvania. It’s part of One Hundred Nights of Taps and Severson will perform a night in mid-July.

Other performers for One Hundred Nights of Taps include veterans, Civil War re-enactors, community band members and music teachers. The event is put on by the Lincoln Fellowship of Pennsylvania, Gettysburg National Military Park and Taps for Veterans.

Severson grew up in Harmony, Minnesota, among a small class. This allowed him the chance to try a little bit of everything, he said. He started playing trumpet in sixth grade and has continued off and on through the years, in community bands and church groups. During the Vietnam War, he wanted to serve, he said, but couldn’t for health reasons.

While participating in Torske Klubben, an area Norwegian club, he saw the recording being used for eulogies. He approached a club leader and said, “You know, I’m not real good, but I sound better than that.”

So it began. Now he plays for Bugles Across America and Taps for Veterans. He tries to perform better, little by little, each time.

“‘Taps’ is one thing you can do for a family that they’ll appreciate,” he said, “and it will do something for their tears,” he said.

Severson and his wife are eager to set out on the road trip to Gettysburg July 13. It’s the one part of the country he hasn’t seen, he said. He even invested in a new bugle for the upcoming performance.

“It is my privilege to play ‘Taps’ at Gettysburg,” he said, “to honor all who have served.”

Severson is retired from the financial services industry. He is the author of “Connecting Peace, Purpose and Prosperity” and “Achievers: Ordinary People Who Do Extraordinary Things.”